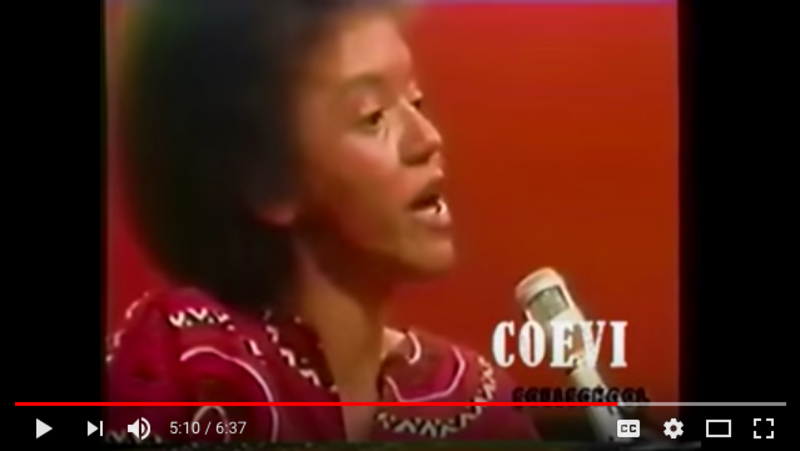 Giovanni was an author, poet, and activist who was an important player in the Black Arts Movement (Wainwright and Zerbonia). The video above is of Giovanni reading from her book Gemini: An Extended Autobiographical Statement on My First Twenty-Five Years of Being a Black Poet. Published in 1971, when the activist was 28-years-old, the book is essentially about Giovanni’s first 25 years of life.

In the excerpt read in this video, Giovanni expresses a complex understanding of Black men, and of Black women’s relationship with Black men. Early-on in the excerpt, Giovanni indicates that Black men are held back or oppressed by Black women:

So little of a Black man’s existence relies on his acts. His women, mothers, sisters, lovers, control his life. And generally, so irresponsibly, that it can be frightening. And sometimes Black women aren’t very nice, for a lot of reasons. And sometimes we use our power against him, for a lot of reasons. And I think some of the hostility is real, and must be related as such. We’re angry and so are they – but it’s only when we admit it that we can get anywhere (“Nikki Giovanni”).

While Giovanni seems to be attempting to bring nuance to Black women’s actions in relation to Black men, offering an explanation for the “hostility” she cites, she fails here to reference racism and oppression outside of the Black community. Perhaps in saying “for a lot of reasons,” Giovanni is implicitly referencing that Black women are themselves oppressed by the US’s white patriarchal society, and that this will of course carry over into Black women’s interactions with Black men. Giovanni is therefore offering a bigger picture as to why relations between Black men and Black women might be the way they are (Note 1). Still, Giovanni’s statements seem to put unwarranted blame on Black women for the oppression of Black men.

Giovanni’s understanding of Black women’s control over Black men, and the men’s resulting lack of control over their lives, could have been influenced by the Moynihan Report and its aftermath. The Moynihan Report (Patrick Moynihan’s 1965 labor report, The Negro Family: The Case for National Action) “contends that the problem in Black families is that African-American women are more powerful than their male counterparts” (Collins 879). Giovanni seems to be framing Black men’s interactions with Black women in a similar light, which perpetuates a stereotype of Black womanhood as dominating and seems to blame Black men’s struggles on the Black women in their lives.

Giovanni…told Peter Bailey of Ebony magazine that she had a baby “because I wanted to have a baby” and that she didn’t marry the father because “I didn’t want to get married, and I could afford not to get married.” According to Martha Cook [who wrote an article on Giovanni’s life and work], “Giovanni has remained unmarried and has consistently viewed her single motherhood as a positive choice” (Wainwright and Zerbonia, emphasis in original).

In the Gemini excerpt, Giovanni stands by her decisions of autonomy:

I didn’t want to get married, buy a 5-room house in the suburbs, and have lunch at Caproni’s as my big event of the month. I could see becoming a bored, alcoholic social worker with a couple of kids I didn’t want, by a man I barely spoke to, and wondering at 35 what I’d done with my life (“Nikki Giovanni”).

So, while part of Giovanni’s excerpt seems to condemn Black women for their agency, Giovanni’s personal example and actions speak louder to tell a story of Giovanni’s advocacy for women to do what they want and be who they want to be – with or without a man.