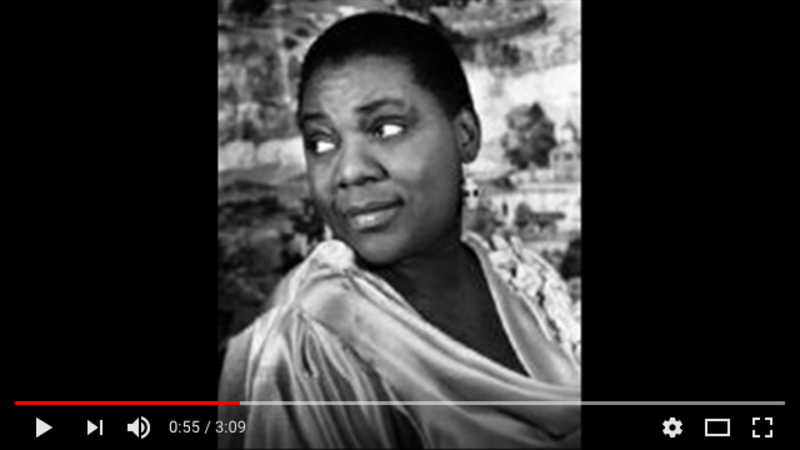 Black women’s relationships to blues, and the effects that it had on (and parts that it reflected of) their sexual and romantic lives, are complex. One the one hand, blues offered a platform for Black women to express themselves sexually and romantically. On the other hand, many of the songs that Black women sang were written by men rather than the Black women singers themselves, and images produced by the songs were often fed by myths of Black women as overly sexual, which then perpetuated these images.

In defense of the agency and self-expression offered the Black women by the blues, Angela Davis writes:

Emerging during the decades following the abolition of slavery, the blues gave musical expression to the new social and sexual realities encountered by African Americans as free women and men. The former slaves’ economic status had not undergone a radical transformation — they were no less impoverished than they had been during slavery. It was the status of their personal relationships that was revolutionalized. For the first time in the history of the African presence in North America, masses of black women and men were in a position to make autonomous decisions regarding the sexual partnerships into which they entered. Sexuality thus was one of the most tangible domains in which emancipation was acted upon and through which its meanings were expressed. Sovereignty in sexual matters marked an important divide between life during slavery and life after emancipation (Davis 4, emphasis added).

As Davis mentions, individual agency in sexuality was an important differentiation between Black women’s lives before and after the abolition of slavery. Therefore, the ability to sing about their sexuality in blues was also an important marker and representation of their new freedom, given that the so-called “freedom” hadn’t gotten Black women much else economically or socially. However, Victoria Granda argues that “sexual expression in blues songs should not be simply equated with the politics of female liberation” (Granda 35).

Many pieces that Black women in blues sang were male-authored. For example, Ma Rainey, “Godmother of the Blues,” sang many songs written by (often white) men, “with the theme of the sexually aggressive woman” (Granda 40). This trope hearkens back to stereotypes of the hyper-sexualized Black woman that have been present since 16th-century European men shared their travelogues with the world, spreading myths of African women’s “sexually and reproductively bound savagery” (Morgan 191). Though this highly sexual imagery can be problematic in that it feeds into a trope that dominant (white) media uses to oppress Black women, Black female blues singers chose to sing these male-authored songs. Granda’s analysis of this decision states, “[Ma Rainey and Bessie Smith] allowed themselves to be exploited as a stereotype, in a sense selling themselves, but by doing so they gained money and power and were able to express some truths about themselves and their sexuality” (Granda 41). That is, Black women were able to gain personally from subjecting themselves to mainstream tropes, which is a form of exerting individual agency.

In a similar situation, also in the early 1900s (1939), actress Hattie McDaniel chose to play a racialized Mammy figure in the movie Gone With the Wind, though she was aware of the racism involved in the character she was being asked to play. When criticized for perpetuating problematic and oppressive images of Black women, McDaniel responded, “I’d rather play a maid and make $700 a week, than be a maid for $7” (Wanzo 140). It is unfortunate that a Black woman in the spotlight is pressured to act in a certain way in order to represent other Black women well, or to be a “symbol” of Black womanhood. In a US society that lumps all Black women into a group and calls each Black woman a symbol of the others, she not simply act how she desires to act and have her actions be seen as representing only her. McDaniel’s, Rainey’s, and Smith’s decisions to perform the art that they performed represent their agency, and a defiance of the expectation to represent all of Black womanhood. Though these artists may be criticized for “not looking out for other Black women” by perpetuating problematic stereotypes of Black womanhood, their portrayal of these tropes allowed them to participate in mainstream media, to gain fame, and to profit economically. (Isn’t individual gain what the American Dream is all about? Or is that only for white folks?)

Though many songs performed by Black women in blues were written by men, the above piece, “Thinking Blues,” was not only performed but also written by Bessie Smith. This allows Smith to have more of a voice than in other songs that were written by men. Granda argues that, as opposed to Smith’s male-composed songs like “Put a Little Sugar in My Bowl,” “[‘Thinking Blues’] presents an image of a woman who thinks not just about her sexual desires but about old letters from former letters and the Bible” – referencing Smith’s mention of “the good book” (Granda 42). In this way, though Smith was often expected to perpetuate overly sexualized tropes of Black womanhood, her fame also gave her a platform to speak her own truth and show the world the Bessie Smith that she desired to portray.